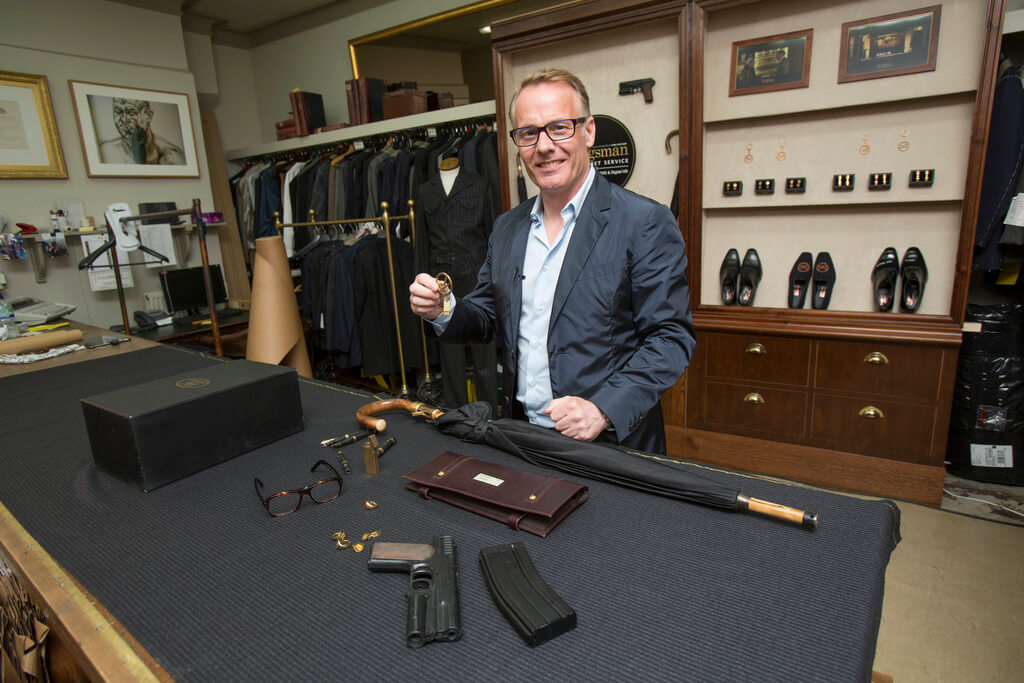 David Cheesman via The Raygun

Meet prop master, David Cheesman from the United Kingdom, a wizard at bringing cinematic worlds to life with the help of his hard-working coordinator, supervisors, set dressers, prop makers, storemen, chargehands, and foremen.

He recently finished, The Voyage of Doctor Dolittle featuring Robert Downey Jr. and is currently in pre-production for the new HBO Sci-Fi Comedy Series, Avenue 5 with Hugh Laurie.

So what does a day look like as a Prop Master?

David gets to set early and checks in with the AD for any script changes that may have happened overnight.

With swiftly changing scripts and schedules, David ensures that he stays one step ahead to prepare his crew for every scenario — whether that be moving a set around for an updated camera angle or constructing a last-minute prop request.

Today’s a large banquet scene with 30+ background actors. David’s crew is all hands on deck.

After talking with the AD, David finds out that the scene’s been flipped, as in the end of the banquet is being filmed first. David works closely with the set decorators and food stylist to set the look as his team trucks in tables, chairs, napkins, and crates of food items.

After the scene wraps, David’s crew strikes the set by cleaning up and moving away all the food props. They quickly transform the space to set the look for “before” the banquet.

As David explains, “It’s a bit like moving house 5 times a day.”

Often, David is balancing multiple sets in different stages so he relies heavily on supervising dressers to be his extra set of eyes and arms when he can’t be on another set.

When a film is heavy on CGI, David gets crafty in his workshop, building out things like animatronic animals to fill in for what will eventually become a digital version of a giraffe or penguin.

To help actors engage as realistically as possible with the “animals” in his otherwise empty space, and maintain correct eyelines, David and his prop makers used foam, plastic, metal, and others materials to sculpt shapes of animals and even add contraptions that allow mouths to open or tails to wag. Adding movement to these props further helps the animators create the CGI effects during post-production.

As scenes are shot, struck, and redressed throughout the day, props are frequently moved around in crates and it’s up to David and his team to track every single item. David relies heavily on technology like SyncOnSet to manage his vast inventory for returns and possible reshoots months later.

Once images are signed off on, David uploads them into SyncOnSet with barcode and prop house information. He then assigns them to a scene and character for easy tracking during the rest of production.

He manages the inventory by generating reports through SyncOnSet. This allows for an efficient wrap so his coordinator knows exactly what props need to be returned.

Tomorrow, David’s coordinator has hired on day players to fill in for another big shooting day to assist David on set. Because there are so many moving parts on a film project, she connects them with a digital packet of pictures and script breakdowns to bring them up-to-speed with the next day’s shooting schedule.

Jumping into the middle of a complicated film projects is no easy task, but seasoned day players can confidently navigate jumping fresh into a scene with continuity photos and an organized props department.

With another day wrapped, David receives the updated script pages for tomorrow and turns his efforts on coming up with his next brilliant prop idea of a giant, flaming sword. No sweat, right? Well, that is, if you’re David Cheesman — the master maker!

“[I] realized that I was there, part of the action, not just looking on from the seats of the movie theater”

Now, how did David actually got into the movie business?

He says, “ I was a massive film fan from a really young age going to Saturday morning matinees…I got lost in the cinema!”

David grew up in the filmmaking hub, Borehamwood, England where MGM and Universal Studios filmed classics like Herbie Rides Again, Where Eagles Dare, and the recent Avengers.

While David’s father worked in the industry, David didn’t particularly want to follow in his footsteps. Yet, after helping out on set a few times as a teenager and earning a bit of money, he says, “suddenly you look back and you’ve been doing it for ten years.”

Working his way up the line from those early days certainly informed David’s role as prop master today.

He explains, “If you do every job all the way up the line, then you have a fuller understanding of all the challenges. So that when you come to your job as the prop master, you know how everyone else feels because you’ve done a little bit of all their jobs.”

What keeps him coming back film after film?

As David recalls, “I remember working on Warhorse with Steven Spielberg — the man behind all the films I saw growing up…we were standing there watching the cavalrymen get up on their horses in the cornfield to do the cavalry charge. I was looking across at all these faces of the film crew that I’d seen on documentaries and realized that I was there, part of the action, not just looking on from the seats of the movie theater”.

2 thoughts on “Day in the Life of a Movie Prop Master: David Cheesman”