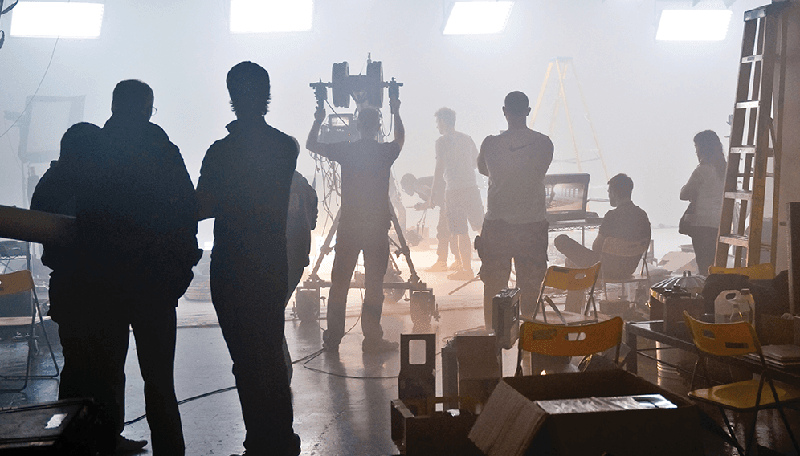 This handy quick reference guide will introduce you to the unsung heroes of any successful production – the film crew.

A Note from The Editor: It’s important to remember that roles, titles, and lists of responsibilities can vary depending on the type of production, the budget of the project, the number of crew members, and the number of logistics involved on a day-to-day basis. This list will give you a general understanding of the various roles on larger productions, though roles and responsibilities may vary.

It’s amazing how many things have to come together to pull off a stellar production, and every crew member plays a pivotal part in making it happen. Whether you’re new to the on-set scene or are curious about getting into the biz, it can be overwhelming to learn and keep track of the many positions that make up the film crew. We put together this handy quick reference guide to help you learn who’s who.

In some cases, Executive Producers are only involved at a high level and are focused exclusively on raising funding, attracting investors, and handling legal and marketing efforts. However, some prefer to be hands-on and active in an on set supervisory role. There are often multiple Producers, both executive and standard, credited per film.

The Line Producer is essentially the production team accountant. This role reports to and works closely with the Production Manager, and is responsible for managing and supervising the entire movie budget on a daily basis. They do so by monitoring all costs, including actor salaries, daily location and equipment rental fees, and so on. This person may also manage the set crew.

This is the dreamer and the brain behind the look and feel of the movie. The Production Designer talks to all the film stakeholders and provides guidance on locations, themes, set design, lighting, props, and costumes to ensure a cohesive final product.

The  Production Office Coordinator (or POC)  acts as the operations manager for behind-the-scenes logistics. Responsible for hiring crew members, coordinating talent, renting equipment, and managing paperwork, the Production Coordinator has a lot of skin in the game when it comes to making sure production goals are met.

“PA” for short, this is a catch-all position designed to provide general support to the crew. On any given day, this may mean making a coffee run, setting up a wardrobe quick-change staging area, or handing out walkie talkies. Many people start their film career as a Production Assistant.

Typically hired by the Producer, the Director calls the creative shots on set. This role is the lead decision-maker when it comes to casting, script revisions, shot composition, and post-production edits.

Having a good Storyboard Artist is critical, because they’re responsible for capturing the director’s vision and sketching it into something visual. Every sketch provided helps guide various departments – from props to costumes, hair, and makeup – in their design process.

The Prop Master is responsible for acquiring, organizing, maintaining, and accounting for all props needed during production. A prop is any easily movable item needed to set a scene. If a prefabricated prop doesn’t exist, the Prop Master brings in a Prop Maker, an artist who uses various materials, machines, and sculpting methods, to build one-of-a-kind props.

A Scenic Artist is responsible for creating the look and feel of the set by treating various surfaces. This can be accomplished by using paint, applying texture, using special treatments to mimic the appearance of metal and other materials, and more.

A Set Decorator is similar to an interior designer, but for a movie set. This person focuses on adding small details; things like paintings, lamps, and rugs – to convincingly set the scene.

Photo Source: Round the World Magazine

The Director of Photography (DP) leads the camera and lighting crews and is in charge of the overall visual look of the film, as seen through the camera. Responsible for deciding which cameras and lenses to use during production, the DP works with the Director to determine how to design and frame shots and to determine how camera movements will be managed.

Reporting to the DP, Camera Operators are responsible for physically controlling cameras during filming. The main Operator frames the shot and makes movements as instructed by the DP. Sometimes, Specialty Operators are brought in to capture aerial shots or to film jib arm crane scenes, used when elevation and smooth movement are needed to film a large area.

A Steadicam is a camera mounting device made up of a mechanical arm attached to a body harness that provides extremely smooth hand-held shots. Steadicam Operators take on the physically taxing job of handling Steadicam setup and operation during production.

The on-set Videographer is tasked with documenting behind-the-scenes action. A Photographer is typically also on set to capture production stills, often used for marketing and DVD box art.

We eat with our eyes, and you may notice that food on film always looks delectable. You can thank the on-set Food Stylist and Assistant Food Stylist for this. Typically highly trained in the culinary arts, Food Stylists are responsible for making sure food looks its best, which is often accomplished using tricks like adding spray-on condensation to a ‘cold’ beverage glass.

Production is a go-go-go job. Craft Services is tasked with making sure the crew doesn’t go hungry or get dehydrated. This group provides snacks and beverages to the film crew throughout the day by keeping a well-stocked station set up on set.

The Best Boy is the lead electrician on set. Responsible for properly distributing electrical cabling to power lights and for operating, adjusting, and balancing the electrical load on the generator. The set can literally go dark if the Best Boy is having an off day.

The Gaffer is the chief lighting technician on set and is responsible for developing a lighting plan that optimizes the shot frame. This is done by determining which lights need to be placed where and working with the Best Boy and Key Grip to make it happen.

As the overseer of proper camera rigging and light blocking and diffusing, the Key Grip, supported by additional Grips, “shapes the light” provided by electricians to create the vision dreamed up by the DP and the Gaffer. This is accomplished by using light-blocking techniques and by incorporating colored light, diffused light, shadows, or patterns.

This job consists of seeking out various filming locations that fit the Director and Producer’s vision of the film. During the research phase, the Location Scout typically presents photos of various possible film locations to production leaders and works to narrow down options.

Once locations have been picked, the Location Manager gets to work paying fees, setting up contracts, arranging permits, obtaining clearances, and coordinating permissions needed in order to shoot on location. In some cases, they also help coordinate parking on shoot day.

Using fabrics, accessories, and lots of creativity, the Costume Designer works closely with Hair Stylists and Makeup Artists to bring characters to life. Tasked with turning costume sketches into wearable garments, Costume Designers will also enlist the help of assistants, who organize, disperse, and maintain costumes used by the cast. This is a behind-the-scenes role that is represented on set by the Costume Supervisor.

Deemed the Costume Designer’s most trusted counterpart, the Costumer Supervisor is tasked with maintaining the integrity of the Designer’s vision from end-to-end. Before filming, this means cataloging necessary wardrobe elements by character and scene number. Once principal photography starts, the Costume Supervisor is responsible for maintaining inventory, focusing on day-to-day continuity and making sure all pieces are worn as intended. During post, this role coordinates rented item returns with the help of costume buyers and other personnel.

This role is responsible for handling logistics for the Costume Designer. During pre-production planning, you’ll find the Set Costumer doing costume-related research, sourcing materials, and working with clothing designers to create one-of-a-kind costumes. This person is also responsible for ensuring all orders are delivered to set and that each garment and accessory meets production and quality standards.

The on-set Hair Stylist is an artist that uses hair as their medium. Directed by the AD and Costume Designer, film crew Hair Stylists must be able to create a vast array of looks. For the sake of continuity, this person also has to be able to repeat hairstyles with precision.

Much like the Hair Stylist, the on-set Makeup Artist (or MUA) is tasked with creating looks that range from flawless to frightening. When prosthetics and latex come into play to create burns, sores, or other gore, a Special FX Makeup Artist joins in on the fun

Often, film days are broken down by when a  portion of a set or location are available, so things are often filmed out of sequence. It’s up to the Script Supervisor to keep track of what’s been shot, what needs to be shot, and ensuring seamless continuity from take to take. This person also takes notes on the best takes for the post-production crew.

Cameras have teleprompters mounted on the front that scroll lines for actors. The Teleprompter Operator is tasked with entering the script into the teleprompter text program before arriving on set and with setting the device up on the camera.

Often referred to as the VTR (video tape recorder) Operator, this role is responsible for setting up video recording equipment to record and playback tape in real-time, which allows the Director to confirm that they got the shot. This person is also responsible for labeling tape with roll numbers and time-codes and for providing tech support if problems arise with equipment operation, conversions, transfers, digitizations, or duplications.

This role is the head honcho of the sound department. Responsible for monitoring, recording, and leveling audio during production, the Sound Mixer determines which mics to use and where to place them to capture the best audio. As a highly-trained Audio Engineer, the Sound Mixer is also capable of mixing various sounds and tracks in real-time.

Responsible for properly positioning the microphone boom pole during filming – a critical step in capturing clean audio – this assistant to the Sound Mixer takes on a physically demanding job every shoot. The Boom Operator performs a delicate dance as they work to keep the boom pole steady and clear of cameras and lights while Actors are moving around.

Responsible for designing and supervising various effects needed throughout the film, this person is a master of mechanical rigging and optical illusions. On any given day, the Special Effects Coordinator can be found setting the scene of a raging storm or assisting with creating props that smoke or explode. This role is supported by a Special Effects Technician, and a specially trained Pyro Technician may be brought in to handle weapons, fire, and explosives.

The Stunt Coordinator is incredibly important in action movies because they’re responsible for implementing safety regulations while coordinating dangerous sequences performed by stunt performers. These types of stunts can include but are not limited to underwater action, car crash scenes, free falls, and anything involving heights, flying through the air, or acrobatics.

There are lots of logistics involved in moving an entire production cast, crew, and all their necessary equipment to a new location. That’s where the Captain, aka Gang Boss, comes in. This role is responsible for managing transportation schedules, getting appropriate parking permits, and providing vehicles to get everyone to various filming locations on time. Transportation Drivers assist by physically driving production vehicles to and from filming locations and getting everyone there safely.

Now that you know who’s who, next time you’re tasked with running a message to the gang boss or the 2nd AC, you’ll know who to deliver it to.